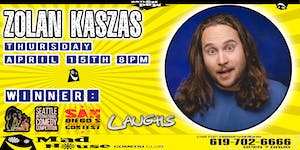 Zoltan Kaszas was born in Budapest Hungary and moved to the United States on July 4th 1991.

At the age of 19 Zoltan was settled into his new hometown of San Diego, California where he got into the world of stand up. Zoltan’s been seen on Dry Bar Comedy, Laughs On FOX, heard on SiriusXM, read about in The Atlantic and has won The Seattle International Comedy Competition and The San Diego Comedy Festival

“I’m trying to show another side of Middle Eastern people. We’re the same. We like to laugh,” said Matin. “If you ask me why I’m doing this, I really enjoy making people laugh.”