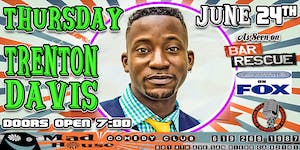 Trenton Davis as seen on Bar Rescue, Laughs on Fox and more!

Trenton Davis’ ten thousand hours of Stand-up comedy is beginning to pay dividends – Trenton was the San Francisco International Comedy Competition runner up for 2016. He was runner up in the prestigious NBC Standup for Diversity program and won 2015 Sacramento Comedy Festival.

Trenton was born in Greensboro, NC and began his comedy journey in Chicago, IL. His unique experiences have shaped his views and created one of the best new comedic writers and performers of our generation. Trenton currently resides in Los Angeles and Atlanta, GA.