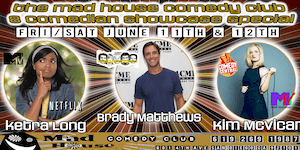 Brady Matthews has been on Jimmy Kimmel Live, It's Always Sunny in Philadelphia, How I Met Your Mother, and numerous TV and print ads. Brady is one of the most fun guys you'll meet, and a down right hilarious comedian.

Ketra Long is a standup comedian, actress, writer and producer from Birmingham, Alabama. She has appeared on Freeform, Showtime, BET and Comedy Central. You can also find her on streaming services including Netflix and Amazon Prime in Laugh After Dark where she recently made her standup comedic television debut and also landed a recurring role in the Roy Wood Jr. Comedy Central Pilot ‘Jefferson County Probation’. She made her theatrical debut in Life of A King starring alongside Oscar winner Cuba Gooding Jr. Ketra has written for networks such as FOX and WeTV. She is also preparing for the release of ‘Bearded’ a webseries she created and will star in as well as make her directorial debut this Fall. On any given night you can catch her quick whitted, no nonsense with a touch of southern charm, style of comedy on any one of several comedy venues across the U.S. including L.A.’s World Famous Comedy Store, Hollywood Improv and Flappers Comedy Club as well as international venues in Europe and Asia.

Kim McVicar is a comedian and former professional dancer (emphasis on former) originally from Canada. Her newest standup special “Kim McVicar: Please Notice Me” can be seen on Amazon Prime, iTunes, YouTube, and many more streaming services. You can hear her regularly on SirusXM (She’s So Funny, RawDog), Spotify and more.

Kim is a regular at the Hollywood Improv in Los Angeles, in the Top 25 on Roast Battle at The Comedy Store, and got the most views in the US for the Laugh Factory’s 2016 online standup competition. Kim has also performed around the US, Canada, and Ireland – where she won the comedy competition “Battle of the Axe.”

Kim was a professional dancer by the age of 5 – when she performed on Tiny Talent Time (Canada’s Star Search). She went on to dance for the Toronto Raptors, Culture Shock, and for pop stars such as P. Diddy, M.C. Hammer, and Kid Sister.

Justin Rupple is a Los Angeles based stand-up comedian, actor, and voice actor. You’ve seen his amazing impressions on the new USA show “First Impressions” with Dana Carvey, and in the upcoming film “Operation Chromite”, starring alongside Liam Neeson.