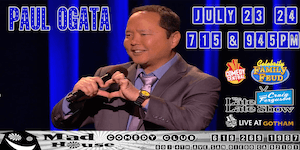 Paul Ogata’s show is an edgy, often-improvised, always-hilarious, mad romp through the corners of his mind. His quick, animated delivery of clever material led him to victory in the prestigious 32nd Annual San Francisco International Comedy Competition. Paul headlines shows around the world!

On television, Paul’s one-hour special, “A Collection Of My Favorite Lies,” debuted recently on Amazon Prime. Paul also had one of the only half-hour specials on Comedy Central Asia. In America, you can see Paul on the Showtime presentation of “Pacific Rim Comedy.” Paul has also been featured on Comedy Central’s “Live at Gotham”, the syndicated “Comics Unleashed with Byron Allen” and co-stars in the underground hit motion picture, “Porndogs” with adult-movie legends Ron Jeremy, Tera Patrick and the late Marilyn Chambers. He has also appeared in Damon Wayans’ film “Behind the Smile”, on ABC’s “Celebrity Family Feud,” on CBS’ “The Late Late Show” as well as on TBS, NBC and PBS.

Tre' Stewart is a LA based comedian from Detroit who has been featured on BET, Laughs on Fox, and can be seen performing at The World Famous Comedy Store and all other clubs in the Los Angeles area. Tre was recently featured in an Academy Award Nominated Film opposite Lance Riddick.