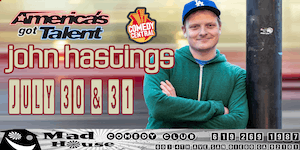 Over the last fourteen years John Hastings has appeared at every major comedy festival in the world including Edinburgh (2012-2019), Melbourne and Just for Laughs Montreal. He has told jokes on BBC Radio 4, BBC 1, BBC 3, Comedy Central, CTV Australian Comedy Channel, and CBC The Comedy Network. He is also the COCA Comedian of the Year, a Martin Sims Award Nominee, an Amused Moose Comedy Award winner, and was briefly a viral sensation after Dennis Rodman heckled him in Los Angeles. He was most recently spotted on America's Got Talent.

You might have seen Chris do stand up comedy on tour in the UK, USA, Australia or New Zealand or on telly. He's been on some fun tv shows, I Think You Should Leave with Tim Robinson (Netflix), Comedy Central Presents (Comedy Central UK), As Yet Untitled with Alan Davies (Dave), Horrible Science (ITV). He's made a podcast with his friends Carl and Trevor called Babysitting Trevor which won silver (which I prefer to gold as a metal anyway) in the British Podcast Awards 2018.

Chris has written and sold some comedy pilots (BBC, FX).

Keith Carey is a Long Beach-based comedian who performs all over the country, sharing his thoughts on comic books, homophobia, racism, the joys of crystal meth, and other hard-hitting topics. Born in Seattle, Keith moved to Orange County, CA at the age of 5. He first took the stage at an open mic in Long Beach in June of 2011, and he hasn't slowed down since. Keith performs nightly, either on the road or at home in Los Angeles, sharing his blend of personal stories, social commentary, and good old-fashioned American dick jokes. Keith is a regular at the Comedy Store's popular Roast Battle, which he also performed on at 2016's RIOT Alternative Comedy Festival in LA. He has also been featured onNerdist.com's "Competitive Erotic Fan Fiction," where he made a sexual nightmare out of the film "Space Jam." He produces a monthly show in Los Angeles called Warp Zone that has seen performances from Aziz Ansari, Maria Bamford, Pete Holmes, and many more. Keith also co-hosts the Mean Boys Podcast. He is a big dumb idiot and he loves you.