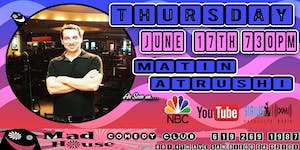 Matin Atrushi as seen on Dry Bar Comedy and more!

Matin Atrushi’s parents were Kurdish political refugees from Northern Iraq, forced out by Saddam Hussein’s troops where they escaped into the Kurdish capital of America, Bismarck, North Dakota. “The great thing about being a minority in North Dakota is that you can double as multiple races because no one can really tell. This week I feel like being Mexican, next week let’s try Indian,” joked Matin on stage.

Matin’s fascination with comedy began at an early age as the family would gather around and watch John Ritter on “Three’s Company” although the young boy’s parents barely spoke English. “Jack Tripper’s comedy was universal. My parents would laugh at his physical humor and antics,” said Matin.

Matin first tried stand-up comedy at the age of 24 in a small coffee shop in Los Angeles and has been at it ever since. He has since shared the stage with comedy legends such as Robin Williams and Chris Rock. He is a comedian with a unique perspective into the everyday life of being Middle Eastern in America today.

Matin broadened his comedy reach by making comedy sketches online. He recently wrapped production of two comedy short films that are shaking up the San Diego comedy scene. Recently released, the two sketches can be seen on YouTube where both have gone viral.

The sketch, “Day at the Beach,” portrays a Frenchman who decides to enjoy a quiet picnic at a Normandy Beach – on June 6, 1944. The viral video was viewed over 200,000 times in its first six days on YouTube.

The second short film “Uncle Matin’s Sword Trick” recreates one of the greatest scenes in cinematic history with the help of NBC “Chuck” star and fellow comedian Mark Christopher Lawrence and has accumulated almost 500,000 views.

The sketch was shot on location in Temecula with comedians and crew from the local area as well as Los Angeles. “Temecula actually doubled as a location in Egypt,” laughed Matin.

Matin’s fellow actor brings significant credits to his work. Mark Christopher Lawrence has a long list of credits including Terminator 2, The Pursuit of Happyness as well as appearances on TV shows such as “Heroes,” “My Name is Earl,” “Malcolm in the Middle,” and over 50 other guest spots.

“I’m trying to show another side of Middle Eastern people. We’re the same. We really like comedy, too” said Matin. “If you ask me why I’m doing this, I really enjoy making people laugh.”